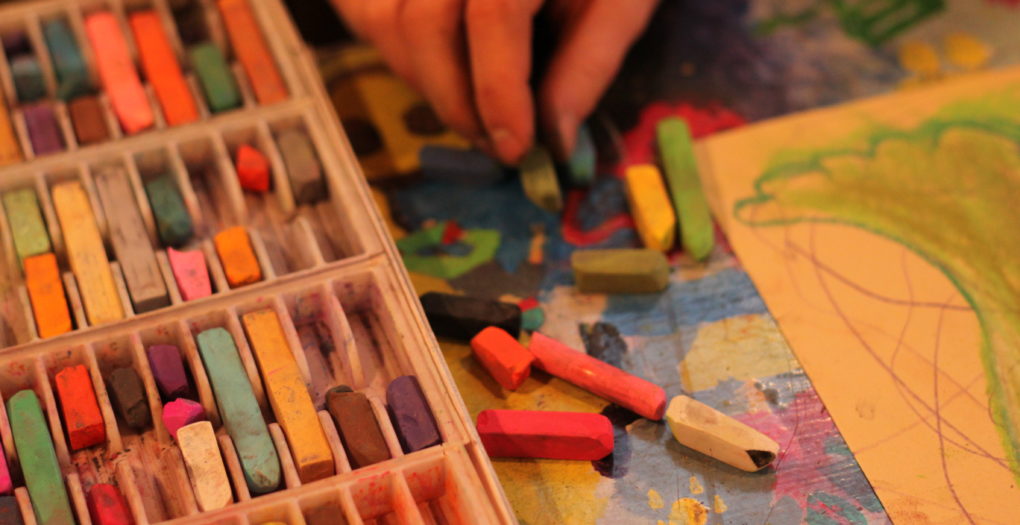 Several years ago I was chatting with a seasoned therapist who uses cognitive behavioral (CBT) techniques to treat OCD. He asked me, somewhat skeptically, whether I thought it possible to combine a science-backed, proven technique such as CBT, with the relatively new Art Therapy, which is not as yet scientifically proven — and have it be useful in OCD treatment.

My answer to him, was, “It depends.” The form of CBT used in OCD treatment, known as Exposure and Response Prevention (ERP), is considered the proven, gold standard treatment. It has a specific protocol that must be followed closely by a trained therapist, for it to be effective. However, many reliable sources of OCD information and support, such as IntrusiveThoughts.org, are saying it is possible to use Art Therapy techniques within the parameters of ERP to augment treatment for clients who suffer with intrusive thoughts.

Clients, especially children, who are newly diagnosed with OCD and may not be fully aware of the extent of their symptoms, can benefit from drawing it out. After participating in standardized testing and an initial discussion with their therapist, the drawing process can often spur new insights that maybe they hadn’t thought to mention in conversation. For example, I was working with a child who had anxiety about contamination but it wasn’t until he drew his classroom, “Where’s Waldo” style, that I was able to understand the extent of the contamination fears and begin to collaborate with him on how to develop a hierarchy of symptoms and a treatment plan.

Sometimes clients’ intrusive thoughts are so fearsome they can’t even begin to verbalize them. (Who would want to tell a therapist he was afraid he might kill his classmates or that her mind kept ruminating about sex with a religious figure?) Yet when you’re dealing with OCD, which involves the brain fixating on these types of erroneous, ego-dystonic, terrifying intrusive thoughts it’s important for a client to be able to verbalize them to another human being. This is the first step in the process of helping the brain “habitutate” to the thoughts, and becoming less “reactive” to them. In this context, art making can help a client to begin to express a horrible thought, he cannot yet verbalize, thus helping treatment to progress. I once worked with a youth who, after several sessions, remained unable to verbalize an unwanted, taboo thought. I asked him to draw a burrito.

“Fill your burrito with ingredients that correspond to your thoughts,” I said, “in the proportion to which they are bothering you.” The client began to draw a burrito, filling it with beans, rice, chicken, salsa, each food item representing one of his obsessive thoughts. The ingredients appeared in proportions representative of the level of disturbance each thought represented. But then he got to the beans and stopped. “There is too much beans,” he said, blackening the beans, which stood out in the top center of his burrito drawing. This was the beginning of being able to help the client verbalize his worst, most intrusive thought. We began referring to the thought as “The Beans,” which lightened his mood, and eventually enabled him to describe the thought in more detail and feel more comfortable working with and verbalizing the bad thought.

It’s important to encourage clients to go at their own pace and use art materials that don’t expose them too rapidly to an intrusive thought. Wet materials, such as paint and clay, which is often used in sex therapy, should not be used early in treatment because they could potentially be too triggering. Colors, also should be offered carefully, as certain colors can also be very triggering for some people. I think of a young woman who feared she had harmed children (she hadn’t). She was very triggered by the color pink. However, later in treatment she purposely used the color to trigger herself and habituate to her scary thoughts. One boy whose intrusive thoughts involved a particular video game character was triggered by the color yellow but was eventually able to transition from drawing his scary scenes in black-and- white, to using the color yellow to add challenge to his exposure work and thus increase his distress tolerance.

Clients with intrusive thoughts can also facilitate their exposure to fearsome thoughts by painting them in the abstract. As therapy progresses, they paint ever more explicit images, and view their paintings each day. Or, if they like to draw, they can draw one cartoon panel each session and gradually increase tolerance to their scary narrative. This sounds easy. For somebody with OCD it’s a challenge. But it’s well worth it in terms of treatment. This is not about making great art, by the way, it’s using art as a processing tool, no more, no less. This is not about a therapist interpreting your art for you, it’s about you creating something that stimulates your brain to express, process, formulate, integrate, and possibly begin to heal.

So for those who are so inclined, Art Therapy can be a great way to augment talk therapy for OCD. However, it’s very important to first seek out a therapist who has specific training in CBT and ERP for OCD, as well as a focus on and experience with treating multiple OCD clients. This is so important, because traditional psychotherapeutic techniques often do not work for this neurobiological disorder could potentially worsen symptoms. If your OCD therapist happens also to have training in Art Therapy, and you are willing to give it a try, that’s icing on the cake. Lastly, make sure to do general research into OCD symptoms and coping techniques by visiting sites like IntrusiveThoughts.org/ocd-symptoms that provide valuable information about the disorder and ways to manage it. Good luck.

Sarah Tippit, MA, IMF, treats OCD sufferers of all ages under the clinical supervision of respected Southern California OCD specialist, Lori Riddle-Walker, LMFT, EdD. Sarah received her Master’s Degree from Loyola Marymount University in Marital and Family Therapy with an emphasis in Clinical Art Therapy. She is a member of the International OCD Foundation.